You Are Here: Home / OTHERS / Awareness campaign for indigenous communities against COVID-19
Apr 27, 2021 fedec No Comments

FEDEC, in partnership with the Grand Zambi health centre, the BIPINDI Assisted Medical Centre and the Ngovayang hospital, has launched a massive awareness campaign on compliance with barrier measures to prevent the spread of COVID-19 within B/B indigenous communities. The said campaign ran from March 29 to April 9, 2021 and reached 227 people including 136 women and 91 men in 24 B/B communities. In addition to awareness messages, 465 washable mufflers and 550 pieces of soap were distributed to the communities. The medical teams tested 43 people. No positive cases were recorded. Other medical acts were performed during these raids as well. These included, among other things, prenatal consultations carried out on 23 pregnant women. Vaccines against tuberculosis, polio, yellow fever, measles, tetanus, and diphtheria were administered to 89 children. 49 people were dewormed. Treatment was given to 186 people suffering from various illnesses. 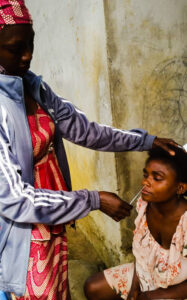 Receive all our latest informations on your email.