A modern maternity hospital at the Ngovayang Catholic Hospital

You Are Here: Home / ACTUALITES / INFORMATIONS / A modern maternity hospital at the Ngovayang Catholic Hospital

The modern maternity ward of the Ngovayang Catholic Hospital, built thanks to a donation from the Embassy of Japan in Cameroon, was inaugurated on July 20, 2018.

The inauguration ceremony was chaired by the Secretary General of the Minister of Social Affairs in the presence of the Ambassador of Japan in Cameroon, the representative of the bishop of the Diocese of Kribi, municipal and traditional authorities, and the President of FEDEC. People of the area massively gathered in front of the Ngovayang Hospital. The presence of a delegation from the Bakola/Bagyeli community, headed by the traditional leader Joseph Nkoro, was remarkable.

The ceremony featured speeches delivered by the representatives, a guided tour of the maternity ward, a blessing prayer, and finally the ribbon cutting.

Built on an area of 130 m2, the maternity ward is composed of five rooms, namely: a reception room, a delivery room, two hospitalization rooms, and a neonatology room. Among the new equipment are an ultrasound machine, a hematology counter, a delivery table, an incubator, six beds, six cradles and ten infusion stands.

The new maternity ward strengthens the Ngovayang Catholic Hospital’s capacity to deliver cares to mothers and children. It will also contribute to the reduction of infant and maternal mortality among local communities. As a reference health center, the new maternity ward of the Ngovayang Hospital covers the districts of Bipindi and Lolodorf whose population is of about 35 000. 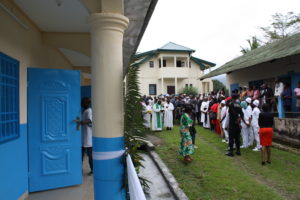 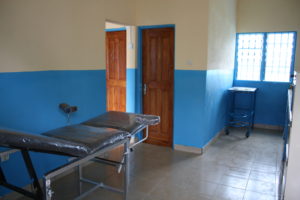 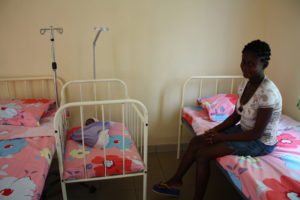 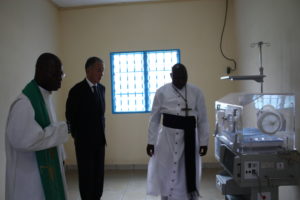 The Embassy of France visits the Ngoyang Home